Adoration of the Kings

This panel comes from the altar of the Oddi chapel in the church of Sant'Agostino in Perugia, where it is mentioned, with an attribution to Eusebio da San Giorgio, by Vasari and local historians. The painting probably also had a predella, which had already been lost when the property of the church was taken over by the state in 1863. One recent theory suggests that two artists may have been involved in painting this panel, one of whom could be identified as Eusebio da San Giorgio, for the figures in the centre and on the right, which are accurately constructed with soft, embracing brushstrokes and set in an impalpable atmosphere, while the other can probably be equated with Sinibaldo Ibi, whose hand can be traced in the angels and the characters on the left, who feature a crisper style and bright, vivacious colours. Eusebio used a dated type of iconography that was older than Perugino’s newer compositions, in which the hut is placed in the centre and the figures are gathered together in the lower part of the painting. The scholar Laura Teza has suggested that the Oddi family could be identified as the clients who commissioned the work, as a counterbalance to the comparable subject painted by Perugino, which has been traced to the environs of the Baglioni family, the Oddi family’s bitterest enemies.

Original placement of the artwork: 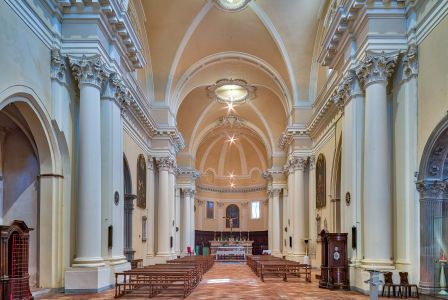