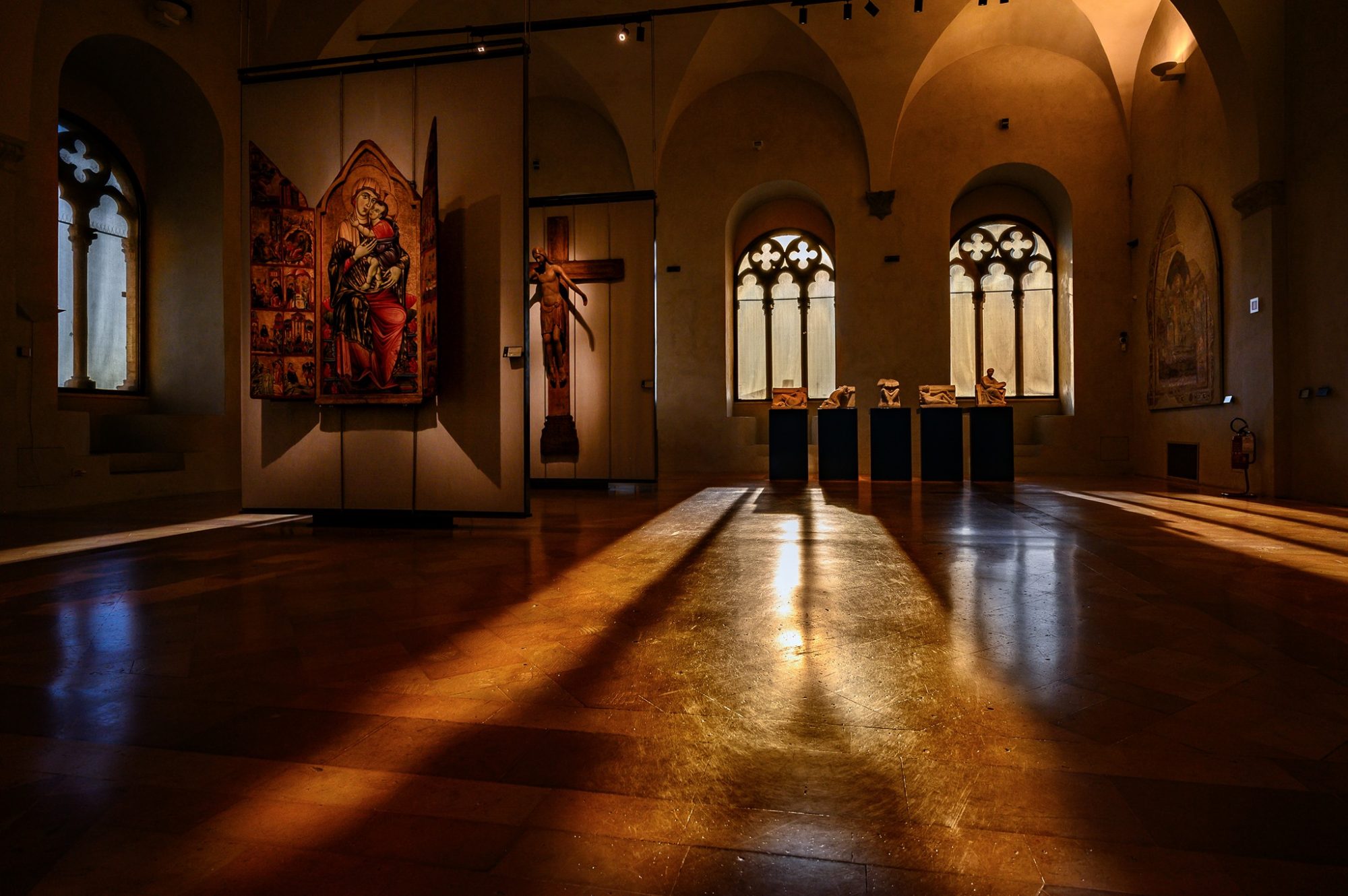 The National Gallery of Umbria, one of Italy’s leading art collections, is housed in the upper floors of the Palazzo dei Priori in Perugia, home of the Comune, or municipality, since the Middle Ages and a significant example of Gothic civic architecture. The museum’s foundation was linked directly to the Academy of Fine Arts (originally the Academy of Drawing) and benefited from a major stimulus after Italy’s unification, following the suppression of religious orders and corporations. The museum was separated from the Academy definitively on 4 June 1863 to become the Civic Painting Collection and was named after one of the city’s greatest artistic sons, Pietro Vannucci, known as Perugino. Ten years later, the entire collection was moved to the Palazzo dei Priori.

In 1918, the collection was taken over by the state and given the name of the Royal Vannucci Gallery, before in due course being renamed the National Gallery of Umbria. Over the years, the entire complex of Palazzo dei Priori has been subjected to remodelling and functional modification works on several occasions. Inaugurated in its current layout in 2006, the museum now occupies 4,000 square metres of floor spaces on two levels. Arranged in chronological order, the collections feature a wealth of important mediaeval and Renaissance works by such artists as Arnolfo di Cambio, Nicola and Giovanni Pisano, Duccio, Gentile da Fabriano, Beato Angelico, Benozzo Gozzoli, Giovanni Boccati and Piero della Francesca, including the latter’s great altarpiece of St. Anthony with its celebrated crowning Annunciation. Special attention is reserved for the Umbrian artists Benedetto Bonfigli, Bartolomeo Caporali, Fiorenzo di Lorenzo, Perugino and Pintoricchio and their pupils and followers. 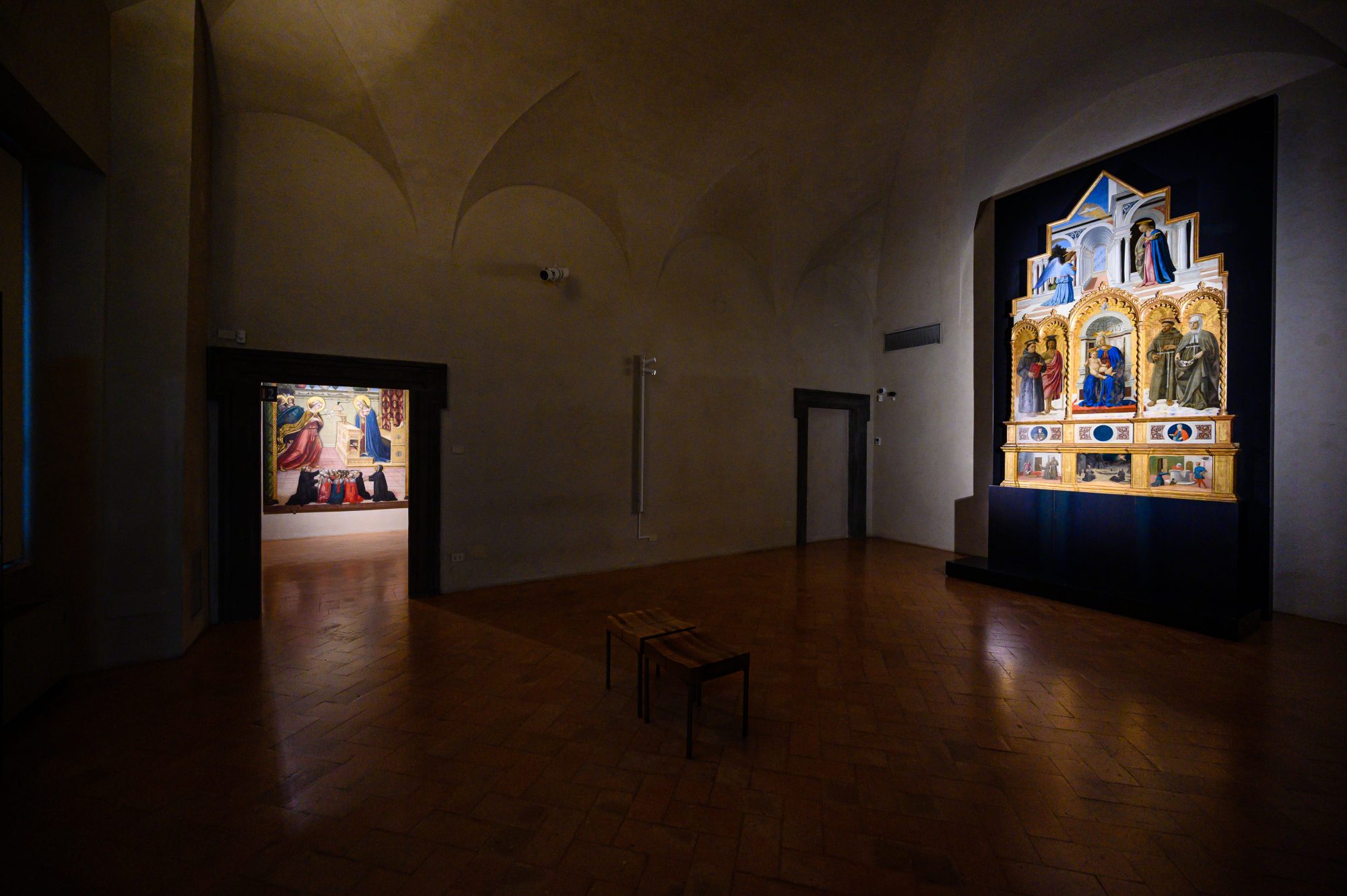 The museum also features thematic sections devoted to the works of goldsmiths and jewellers, to ivory and wooden inlays, to the traditional Perugia tablecloths and to the topography of the city of Perugia. Completing the visit are some priceless works of painting covering the period from the seventeenth to the nineteenth centuries by Orazio Gentileschi, Valentin de Boulogne, Pietro da Cortona, Sassoferrato, Francesco Trevisani, Sebastiano Conca, Pierre Subleyras, Corrado Giaquinto and Jean-Baptiste Wicar. The museum also has a fully equipped conference room, a lecture theatre and the large multipurpose Podiani Room, which is used to host temporary exhibitions, concerts and shows. 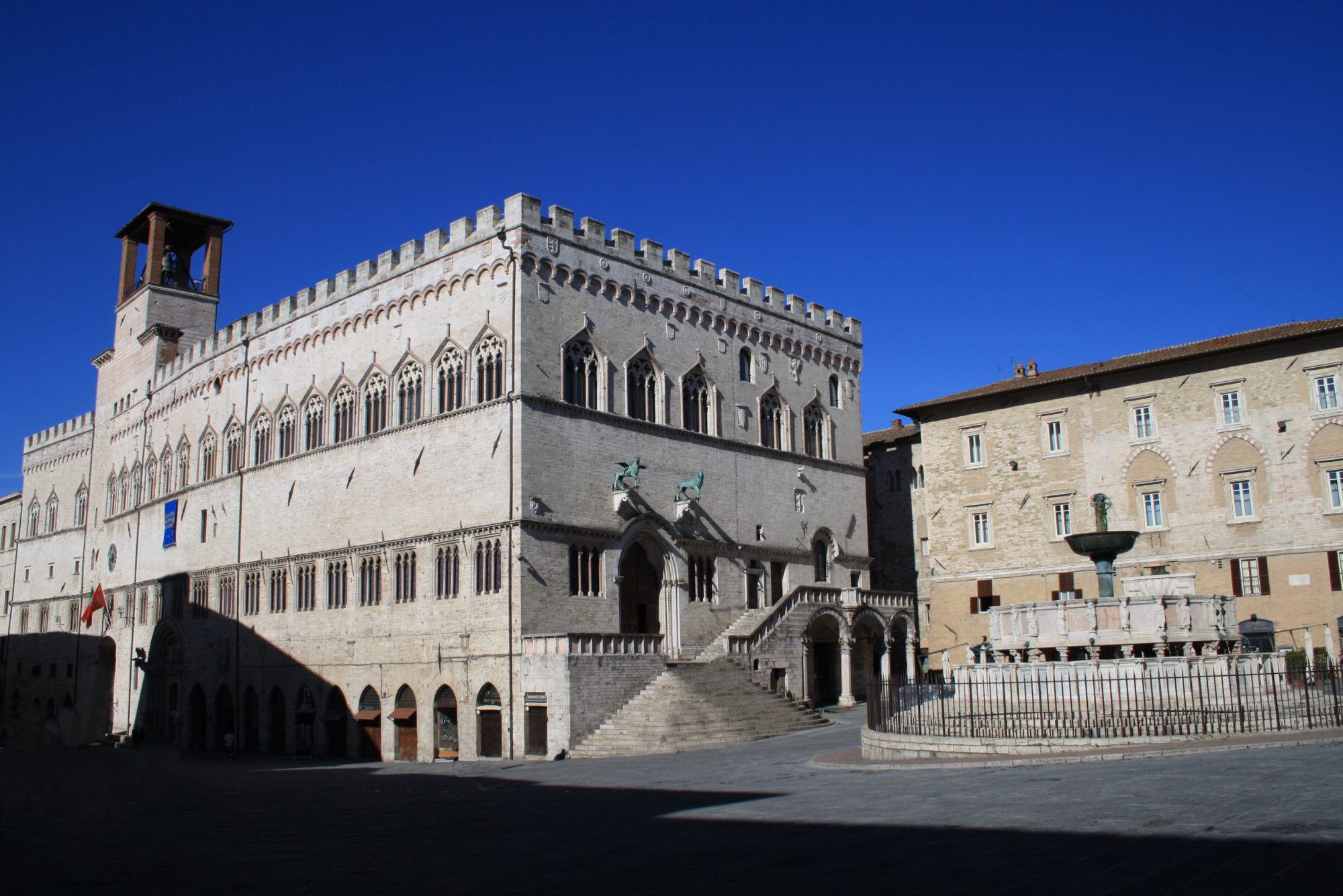 The Palazzo dei Priori is one of the most important examples of Gothic architecture in Italy. It is now home to the Municipality of Perugia on the first floor and the National Gallery of Umbria on the second. The way that we see its interiors today is the result of numerous extensions that were added over a period of nearly four centuries. The first building phase started in 1293 under the guidance of the Perugia architects Jacopo di Servadio and Giovannello di Benvenuto. On that occasion, the work combined the residence of the Captain of the People with the tower of Madonna Dialdana. This old building had a staircase, probably semi-circular in shape, that opened onto the side of Piazza IV Novembre, in front of the Fontana Maggiore, and led to the Council Chamber, which also served as the Captain of the People’s Court and is now the Sala di Notari, or Hall of Notaries. There was a second chamber upstairs (now the Podiani Room), which may have been used for smaller, more reserved meetings. The apertures on the ground floor that still mark the palazzo’s side wall at regular intervals originally housed shops that were rented out to merchants.

A second phase of work was undertaken from 1317 to 1326, this time by the architect Ambrogio Maitani. On that occasion, the architect added a new wing to the palazzo, to be of use in the everyday and institutional life of the city’s magistrates, who were known as the Priors. This wing was laid out towards Corso Vannucci and comprised the construction of a dormitory, a room of malconsiglio (‘bad advice’) and one to house the more important meetings. It was also in this phase of construction that the palazzo was given its main gateway, which is still magnificently well preserved, with its complex decorations of symbols and leafy patterns. In the lunette above the door are copies of the statues of the city’s patron saints: Lorenzo, Herculanus and Constantius. The originals can now be seen in Room 4 of the National Gallery of Umbria.

The Palazzo was extended again further along Corso Vannucci when the Municipality bought the Cola Benvenuti Passeri Servitori tower house in 1331, enabling it to add a covered walkway passing over what is now Via dei Priori, where the bell tower was built. In addition to the tower house, this stage of work also incorporated the rooms next door to it, where the original Priors’ Chapel was installed.

In order to link the oldest core of the palazzo with the new structure, in 1333, after decades of negotiations with the curia, the Municipality managed to buy the church of San Severo, overlooking the Piazza IV Novembre to the west. The project was again entrusted to Ambrogio Maitani.

More extensions were added to the palazzo between 1429 and 1443, when the church of San Giovanni di Piazza and neighbouring houses were also incorporated to build the new Priors’ Chapel, which was frescoed by Benedetto Bonfigli with the Scenes from the life of St. Herculanus and St Louis of Toulouse.

When the palazzo became the residence of the Papal Legate in 1534, the architect Galeazzo Alessi transformed the second floor into a luxurious suite of apartments. It was now that Tommaso Bernabei, known as Papacello, painted the Farnese cycle of frescoes that can still be seen in Room 17 of the National Gallery. Alessi was also commissioned to conduct renovation work on the bell tower and to adorn the west front of the palazzo itself, the façade that now overlooks Via dei Priori, where he added a loggia with three arches.

Just a few years later, the architect and sculptor Vincenzo Danti directed the construction of the internal staircase and the extension of the apartments: a new chapel was inserted on the first floor, together with a second refectory, where Francesco Barca painted the Wedding at Cana in 1579. A library was also created and duly decorated with frescoes by Giovan Battista Lombardelli, together with an Audience Chamber. It was here in 1572 that Dono Doni painted The Magistrates of Perugia Paying Homage to Pope Julius III and Jan Schepers a series of landscapes.

During the decades that followed, the palazzo suffered gradual but relentless decay, culminating in the destruction of the original crenellations in the seventeenth century. It was only in the middle of the nineteenth century that the palazzo was subjected to a new series of projects whose aim was to restore it to its original splendour. The crenellations were rebuilt in 1880, while the frescoes in the Hall of Notaries and the Main Gateway were restored in 1885. The staircase leading up to the Hall of Notaries, which had been transformed into a double ramp in the eighteenth century, was returned to its original form in 1902.